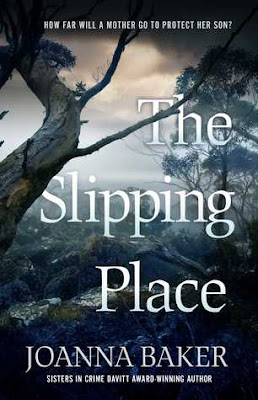 A stunningly compulsive, darkly suspenseful Australian crime novel that asks how far we would go to protect someone we love.

Veronica Cruickshank’s youngest child Roland is her idealistic one – a fighter of lost causes, and the one that always needs protecting, particularly from himself.

So when she hears he is back in Hobart helping an old school friend, Treen McShane, Veronica tries to track him down – but all she finds are second hand reports, whispers of horrific abuse, stories of a small child being hurt.

Then Roland sends Veronica a text message, asking her to go to the Slipping Place, high on Mount Wellington, a picnic spot known only to their family. Here she discovers Treen’s frozen body.

Knowing Roland will be suspected of leaving Treen to die, Veronica resolves to find out what really happened. But as long-buried truths slowly surface, she uncovers a secret that brings the violence closer to home than she could have ever imagined…

Copy received from Ventura Press for an honest review

This is my first read from Joanna Baker, and I was very much intrigued by the blurb.  I am in a bit of a murder/mystery/suspense kind of mood lately.

This is not your typical murder mystery.  We don't have a dogged detective trying to find the answers, we have a mother trying to protect those she loves, all the while trying to find a killer.

Being Australian, I love a book set here, with places I may (or may not!) know.

This is mostly Veronica and Roland's story - mother and son.  It is a case of what has he gotten himself into? What has he dragged her into?

However, I felt this book was a little factured.  There were so many characters involved. So many lies, so much betrayal, just so much.  It was hard to keep my head around who was who, who was up to what.   I have to say, I didn't really like any of the characters. They all seemed very self centred ,and I didn't really feel any sympathy or connection with any of them.  Most of the time I wanted to slap them - all of them!  However this could just be me.

I was very confuzzled.

There were twists an turns as we try to figure out whodunnit - gotta say, it was not who I had expected, so well played Ms Baker!


Joanna Baker is the award winning author of four murder mysteries.  her novel, Devastation Road, won the Sisters In Crime Davitt Award for Best yougn Adult Novel and was described by The Age as 'an outstanding first novel.'

Joanna was born in Hobart and educated at The Friends' School, the Australian National University and RMIT.  She sets her novels in the two places she loves: Tasmania and the wine and high country of North Eastern Victoria. She also writes and speaks about murder mysteries - why they are so enduring, and why they are not trivial.
BJ's Book Blog
‹
›
Home
View web version