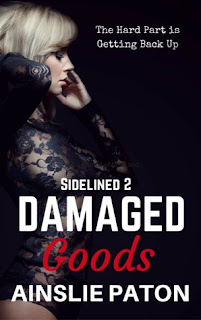 The Hard Part is Getting Back Up

This is the story of a man who can’t get it up and a woman who’s never gotten it on.

Sidelined by a broken back, CEO, Owen Lange is confronted by two things: his sex life will never be the same and he’s dependent on his pain meds. He never expected to have his dependence called out as addiction by a junior help desk employee.

Cara Douglas knows all about pain and loss. She’d had her sights set on the US Olympic Gymnastics Team before an accident landed her at a help desk screen. The last thing she expected to be helping with was an intervention for her boss.

Owen doesn’t thank Cara for her trouble. He calls her a snitch. But even through his paranoia he knows she’s right. After all, addiction runs in his family. He also knows he has to make it up to her, but the only thing Cara wants is the one thing Owen can’t give her.

Question: What do an injured athlete finally ready for no-strings sex and a nice guy who can’t get it up have in common?

We all remember Owen & Cara from the previous book OFFENSIVE BEHAVIOR.
Owen is one of the founders and owners of PLUS, and best friends with Reid, and Cara is the best friend of Zarley, the heroine of the first book.
Owen has been in a bad car accident in the first book and now he's addicted to pain meds and he's treating all his friends like shit.
Cara may be the only person who knows how he feels. She broke her back too, nine years ago, when she was still a professional gymnast.
After being confronted by his friends Owen finally agrees to enter an eight-week rehab program and once he's out he wants to make things right with his friends. And with the pretty little red-head Cara.

Cara is working at PLUS, but she's secretly dreaming to become a fashion designer. She loves drawing and designing dresses and lingerie.
And mega-millionaire Owen might just be the person to help her with that dream. He's on a help-and-atone-mission and helping this cute girl would be just what the doc ordered.

The first thing on his list though: Help find Cara a new roommate. He has time. He's not fit enough to go back to work yet.

Cara thinks that Owen is way too far out of her league...but she can't help staring at and lusting after his gorgeous body. And he's a really good and nice guy too....

But even if something romantic or sexual would start between them.... Owen has this tiny little huge problem ... he can't have sex. At least not real penetrative sex. His accident broke not only his back but his dick too...
But maybe Cara won't care? Or maybe she will be able to heal him?

Nope - not telling you ☺

I REALLY ENJOYED THE BOOK!

Every time we get a new ARC by Ainslie, it's a total Forrest Gump bench moment ... you never know what you're gonna get - you just know that you'll very probably end up loving it.

And this book was really great!

Both Owen and Cara have been through a lot in their lives. Owen is lucky enough to have enough money to afford the best health care, but Cara wasn't that lucky back when she got hurt.

It's so adorable and funny to watch the two of them dance around each other.
And book #1's hero Reid is this amazingly inappropriate fun-guy in the background!
And Sarina & Dev - the next books' couple... adorable!
I just love this group of people!

So many funny moments and moving and sad moments.
Lots of sexy times too. ☺

I loved it.
But... hm... I had the feeling the book was way too long.
It should've been edited a bit more. At least 100 pages could have been cut.
There's too much weird poetic thinking in my opinion.
Also - hehe - LOTS of non-american words and expressions. An australian writer writing an american book...of course there will be some non-american expressions...but I would've wished for an american editor. ☺
BUT...

DAMAGED GOODS was an amazingly beautiful & funny & moving Romance! Makes you think a bit about things too... ☺ You can't go wrong 1-clicking an Ainslie Paton book!!!!

Copy received from the author for an honest review

Yes!  I have been waiting for this story since the second I finished the first book in this series, Offensive Behaviour.

You never know what you are going to get with a book from Ms Paton. No cookie-cutter stories from her, it is like a lucky dip each and every time.... and I love it.

A lot happened at the and of the first book, and Owen and Cara's story continues on from the aftermath of book 1

I felt that this story was quite a bit darker than Offensive Behaviour. Both our lovelies have been through so much, and things are start to take toll on them.  Damaged Goods deals with matters of addiction and abuse among other things.

I can't tell you how many times my heart cracked, how many tears I shed whilst reading,

But with this group, there were also plenty of smiles and laugh out loud moments - especially with my favourite geek Reid!

But can our two damaged souls be the ones to heal each other.  Be the light in the dark?  Be the happy ending they each want?

For that you will have to read for yourself.

Now  am impatiently waiting for the next in the series.

I can't wait to see what Ms Paton brings us next. 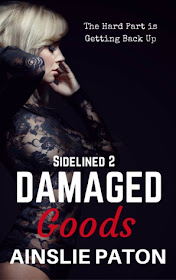 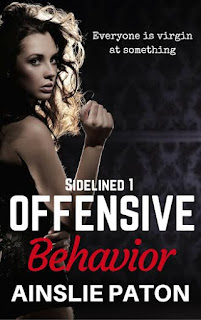 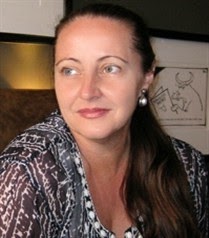 Ainslie Paton is a corporate storyteller working in marketing, public relations and advertising.

She’s written about everything from the African refugee crisis and Toxic Shock Syndrome, to high-speed data networks and hamburgers, and for everyone from George Clooney to Barry Humphries—as Edna.

She writes cracking, hyper-real romances about strong women and the exciting men who love them.